The Day Job intervenes and becomes the Night Shift! 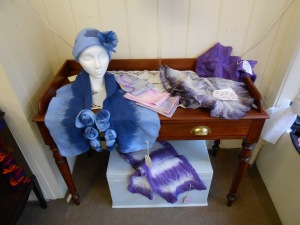 I think I told you I have been getting ready for an exhibition. Well, today was the day.

We took over the little shop at half past seven last night. An empty space which needed filling. After unloading the first lot, John went home for load number two. We had arranged for friend Dennis, who is a furniture restorer, to bring some of the items he has been working on, and he arrived promptly with a van full of lovely pieces that we could  use for display. It took a while to get the various desks and chests out of the van and into position and then Dennis took off and it was down to John and I to sort out my stuff into something resembling order.

We worked until about ten, transferring everything from the plastic boxes in which I store, out into the big wide world. Then we called it a night and came home. I still had lots to do, but that needed an iron and ironing board and could be done at home. The silks were duly ironed, the jewellery pieces collected up and made ready for the morning. I wrote lists of what might be forgotten and finally we were able to go to bed and attempt to sleep (think in my case that was about 2.30 a.m).

I had already priced and labelled what was in the shop in advance, which was a great help. Each label explains the fibre content of an item: I work with merino wool, silk, alpaca, baby camel, and cashmere, adding recycled fibres, recycled velvet, recycled sari fabrics, artisan hand spun fibres, banana fibres, feathers, sequins and anything else that looks as though it might combine with wool and look attractive and/or interesting.

First thing this morning – well, as first thing as I could manage – we were up, collecting mugs, teas, the kettle and other essentials to hold body and soul together. The car was piled up yet again. Back to work by eight thirty. Setting up my mannequins and heads, draping scarves, attaching corsages, dressing the windows, all took time, but needed to be done before the opening time of 10 a.m.  Tacking up  muslin at the windows and erecting a curtain over a particularly dreadful door were the last jobs. And eventually it was finished. In fact the doors were open from about 9 o’clock. People drifted in as we worked, wishing us luck and saying lovely things about the display.

And then John put the kettle on and we settled down to wait – but not for too long. A lovely lady popped in on her way to the bank and decided to rummage in my bargain trunk. She selected a purple flowered corsage, paid £5. and we had broken our duck. At this sort of do, it isn’t red dots on frames, collect at the end of the week; people want to take their item away. I need lots of stock if I am to show-case my wares. And this time, I don’t have lots of stock. If we have a good week, the place may be looking a little depleted by the end. (I hope it is!)

Thursday is a quiet day and we begin in earnest tomorrow, so wish me luck.

If you would like to see some of the other pieces I have on display, I will upload them to a separate page so you can take a look. I have called it Pat’s Pop Up Shop, since that’s really what it is. https://patwoodblogging.wordpress.com/pats-pop-up-shop-october-2012/

And I hope there will be no more night shifts!

34 responses to “The Day Job intervenes and becomes the Night Shift!”

What's New On Your Bookshelf?

The professional genealogy and family history company with a proven track record and fast growing reputation across the globe. Be it local, national or international work, no project is too large or small. Family trees, old photograph restoration, heir hunting, tracing long lost relatives... and beautiful, personalised handbound books for your future generations to treasure forever. www.heir-line.co.uk