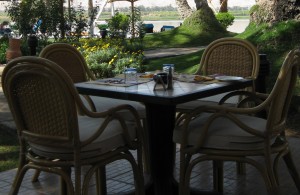 The meeting was a mistake and the solicitor had been right.

‘Take someone with you,’ he said. ‘Someone to keep the peace. A sort of referee. Someone you both respect.’ Not a chance, given that I hate her friends and she loathed mine. Her mother was a terrible idea and my mother refused point blank to have anything to do with it. So I decided to go it alone. Blunder number one.

Marney arrived half an hour late with more attitude than a testosterone-charged teenager.

I, on the other hand, was the soul of reason. I had even taken a table outside on the terrace, so she could smoke. That was apparently Blunder number two. What Marney wanted was a full-scale apocalyptic row and I was determined not to give it to her.

‘Your fault we split up,’ she said. I agreed.

‘Your fault the marriage stalled,’ she said. I agreed.

I agreed with her on everything. However, agreement was not what Marney had in mind.

‘Stop trying to humour me.’

‘I’m not humouring you. I’m agreeing with you.’

‘I can’t win, can I? If I argue with you, then I’m an arrogant bastard who won’t admit my mistakes. If I agree, you say I’m humouring you.’

I didn’t feel very clever. If I got this wrong, I was likely to lose my wife, my house and access to my children on a permanent basis. She had no intention of making my life easy, that was certain.

Blunder number three was when she started to list all the changes she wanted to make to me, the house and our way of life.

That was wrong too.

When she’d gone, I heaved a sigh, mostly of relief. I felt virtuous. At least I had tried to patch things up.

My stinging cheek was not the only evidence she had been there. She had left her cigarettes behind. The packet glared at me, jumping up and down on the table, winking. There it sat, six inches from my unused fork. It had been six weeks since I last tasted nicotine and yet there it was on my breath, in my throat, itching in my nasal passages. I waited five minutes, staring at the door to see if she would return to collect the packet. Then another five. Marney always drove with a cigarette. I pictured her reaching the car, unlocking the door, opening it. Getting in, putting on her seatbelt, reaching for a cigarette.

Would she come back when she found she hadn’t got them? Bound to, I reasoned.

She was wrong though: this wasn’t where she left them.

‘What cigarettes?’ I practised inside my head. ‘Never saw any cigarettes. Perhaps you dropped them.’

My hand reached out under the table, flexing the fingers, experimenting, practising removing them from the cloth.

Not that I needed one, you understand. Not that, having had a stressful hour in the company of a crazy woman, nicotine was what I craved above all else. No. Not at all.

I had given up. I was a reformed character. I didn’t really want one. I was through with the habit. Any fool could be an addict, but it took guts to kick it cold turkey and stay with the plan.

It would be nice though. Interesting to see if I still fancied it, liked the taste. That was all. A sort of experiment.

It would be silly. Stupid, when I had made such an effort, and it had been an effort, to rid myself of the evil weed.

I turned my eyes away, a ‘Get thee behind me’ moment in which I spotted the waiter. He was coming over, juggling two plates of soup in his right hand, a basket of interesting bread rolls in his left.

What would he do when he set the food down? Would he clear the debris of the past hour? Our empty glasses, the overfull ashtray, they sat in the middle of the table, a grubby reminder of how long he had to wait before taking our order. Surely, he wouldn’t leave them there. His turned down mouth and pinched nose indicated a fastidious nature and a lack of tolerance for disorder. He would clear the mess and in the process he might pick up the packet and take it away, believing it was rubbish. At any minute, his hand was going to close over the cigarettes and then they would be gone forever.

My mouth went dry at the thought. I swear a panic attack was all but upon me: slight perspiration on my top lip, my heart beating just a little faster, breath rasping.

I didn’t stop to think about it. My hand shot out unbidden from under the table, crossed the space occupied by my tablemat and closed around the packet in the middle of the table.

In slow motion, I saw the white tablecloth rise in front of me, lifting my place setting, two glasses half-full of red wine, and the full ashtray. All of them shot into the air, taking with them the plate of soup the waiter was in the process of presenting to my absent companion. To his credit, the second dish stayed within in his grasp, not a drop spilled, even when one of the rolls from the basket newly placed on the table sailed up in an arc and landed in the centre of the bowl.

Only when the scene had played itself out, when the last drop of soup had landed, coating my precious cigarette packet, and the plate had spun its final noisy spin on the tiled terrace did I look at his face. The mask of sneering contempt did not waver. He blinked twice, clicked two fingers together rustling up the help needed to restore order to his sanctum.

‘I am so-oooo sorry, sir. How clumsy of me. I will fetch more soup from the kitchen.’

‘Thank you, no.’ I would have shaken my head, but I refrained, terrified of causing a second tsunami. ‘That won’t be necessary. If I could just have the bill?’

The tiny flicker of something in his expression – relief? triumph? – might have been in my imagination.

Beautiful photos of hiking and other outdoor adventures.

Because Life is More than Black and White