The beginning, the middle and the end 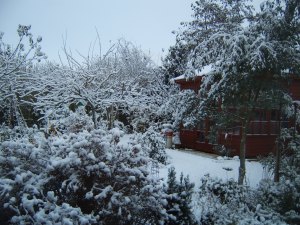 Gratuitous (and not new) picture of snowy day. The beginning, the middle and the end of all references in this post to the yucky white stuff.

I’m writing. I hear the cheer: about bloomin’ time too! And I am past the beginning. You know that exciting time of fresh and new, getting acquainted with the characters, developing a high point to start with, drama to hook the reader, making them tingle, making them desire more.

I’m well and truly into The Middle, the centre slog of the marathon which is a first draft, where it is dangerous to stop, dangerous to re-read, hard graft in fact.

At this point, it is easy to give up. Tired of the story – or even bored with the whole idea of it – we pause, energy depleted, and wonder if there is any point in going on. This is not unusual. It can happen to the best of us, even to the likes of Ian Rankin, apparently, as he admitted in his recent television interview. Page 65 is the beginning of his bete-noire, the point where he begins to doubt. I still think of page 65 as the beginning, but hey-ho, problems arise where they do and we have to be ready.

Doubt is fine. Doubt will keep us on your toes, scribbling to prove that it was a good idea and it is going somewhere. Boredom or ‘mid-book blues’ is harder to deal with. We need to plan for this in advance, knowing that it may well happen, with word counts and little rewards to keep us going.

Our energy may not be what it was at the beginning, so the energy of the book may slump too, like a soggy souffle. Characters may have departed from those first bright ideas: the bad guy looks like a goodie half the time and our hero has cowardly tendencies. This is how it is: well-rounded characters will make the book, but we need to be in charge. Turn it up: make it nastier, make the protagonist work harder, give him a situation he has to be heroic in, give him hell on the page and force him to clamber out, preferably by the skin of his oh so pearly white teeth. Take those characters to a point which is almost beyond endurance, for them and for the reader.

And then breathe, because even then we still have a way to go. There is the ending to write. The main character has a desire, or maybe a shed load of them, and it is the writer’s job to put obstacles in the way, preventing the protagonist from realising those ambitions.

At the end, in the final climax, the central conflict must be resolved, through an upward climb, maybe with a mini-disaster or two en route, putting him in an even worse place than before. But finally he must get to his goal, or something similar to his goal, and we must be satisfied with his achievements.

We talked about endings a while back. They are difficult, as difficult as beginnings and maybe more so. Hooking us to read is hard enough, but having spent hours reading this book, it must have a good finish, or we will feel we have wasted our time and we won’t be tackling any more of that writer’s work any time soon.

The beginning is the easy bit. Now, with the middle and the end, come the hard parts. We must write till it’s done. And then stop.

5 responses to “The beginning, the middle and the end”

What's New On Your Bookshelf?

Because Life is More than Black and White